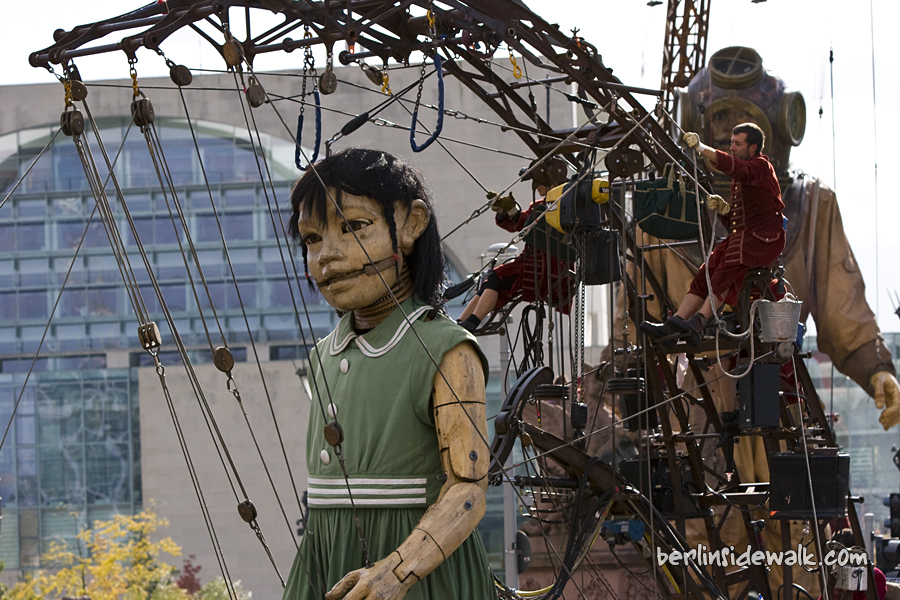 After the Big Giant and the Little Giantess woke up this morning in the Pariser Platz and passed the Brandenburg Gate in front of an enthusiastic crowd of onlookers, they are now strolling along the Straße des 17. Juni, happily reunited.

To send its giants off on their travels, Royal de Luxe needs skill, flair and organization. Otherwise the two giants, 15 meters and 7.5 meters tall respectively, would not move. Both marionettes are supported by vehicles which enable their massive bodies to walk through the streets. The giants move in an unbelievably lifelike way, as if by magic, but it takes 30 “Lilliputians” (actors) just to bring the 2.5-ton Big Giant to life. Though lighter than her uncle, the Little Giantess also weighs in at no less than 800 kg. The bodies of both giants are works of art, made of steel, lime wood and poplar wood.

Just to give an idea of their dimensions: the Big Giant has a European shoe size of 237, and the Little Giantess’s wig was made out of 50 horses’ tails. It takes an enormous effort to make these marionettes look human – a work of art far beyond the grounds of technical feasibility alone.

Now, after 3 Days of hard work, the Giants and their court are finally back in France, they left Berlin by water on their big boat.